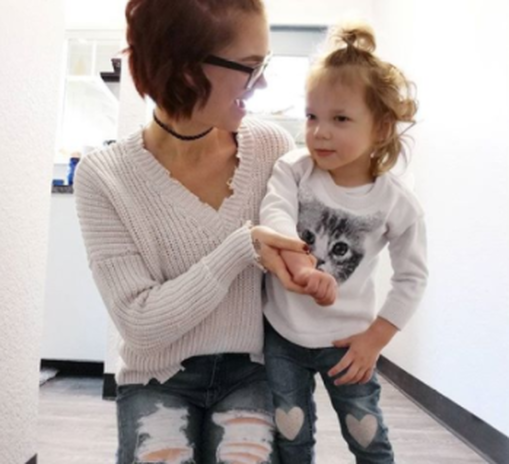 Annebelle was born a perfectly healthy baby girl. She was 9 pounds 2 ounces and 41 weeks gestation with an uneventful delivery. We spent the usual couple days in the hospital post birth and then took her home. For four blissful days I was a mother of two amazing, healthy kids.

The day after leaving the hospital we took Annie into the emergency room because she had not eaten for over 8 hours. We were there for hours and saw multiple doctors, nurses and techs before a labor and delivery nurse came down to place her IV and immediately noticed that she was having neonatal seizures. Her pediatrician was called in and she was transferred to a children's hospital. That was the day that my entire life changed.
​
Annebelle was diagnosed with Incontinentia Pigmenti (IP), an extremely rare genetic condition that runs through my family. I had not tested for IP during pregnancy and Annie did not show any earmark signs of the disorder at birth so I naively assumed we were in the clear. Incontinentia pigmenti is linked to many neurological disorders - including epilepsy - but because the disorder was so common among my family and everyone had a relatively mild case I never dreamed the havoc the disorder could cause. Along with neurological problems, IP also gave Annie blisters on her limbs as a baby and dark pigmented “swirls” covering her body.
​Annie spent 7 long days in the neonatal intensive care unit before being released with a diagnosis of IP and epilepsy along with extensive damage to one half of her brain, she was given a poor prognosis and we were warned that she would likely be developmentally delayed. She was enrolled in Early Intervention through the state and started occupational and physical therapy immediately.
​
While working with Annie and with the help of her therapist I noticed that she had a weakness on her right side, she was soon diagnosed with hemiplegic right sided cerebral palsy which eventually turned to triplegic cerebral palsy (involving her right arm and leg and left leg). 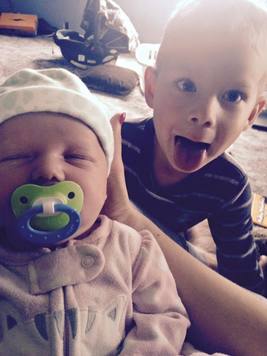 At this point Annebelle had dealt with more than a baby her age should, unfortunately that was not the end of her hardship. In March of 2016, a month before her first birthday, Annie was diagnosed with Infantile spasms. Infantile spasms is a rare, catastrophic form of epilepsy. It is harmful in the fact that it is continuously damaging her brain, infantile spasms consists of a physical “jackknife” spasm as well as a hypsarrhythmia in her brain. The longer that IS goes un-diagnosed the harder it is to control. I believe Annie developed infantile spasms about a month before receiving a diagnosis and treatment. She went through a round of steroid injections twice a day followed by four anticonvulsant medications and the ketogenic diet, After over a year I think her spasms are finally under control. Her neurologist will perform an EEG to look at her brain wave activity to determine if the hypsarrhythmia is gone.

Annie’s cerebral palsy affects her mouth/face and makes it hard for her to move food to her back molars while eating, after a while she developed an aversion to eating orally and eventually received a feeding tube to help her stay nourished and hydrated.
Annebelle is now two years old and we’re getting the hang of our new life. We don't suffer through this disability, this is our life and we are going to embrace it.
​
Last August I decided I wanted to make sure that we did something good, I wanted to take our experiences and turn it into awareness and inclusion and help people. I created our instagram page and #normalizedisabilities to give people a glimpse into life with cerebral palsy with a twist of kids fashion. It was important to me to give kids with disabilities a voice, to show the importance of normalizing disabilities and inclusion and making sure that our kids get every opportunity as everyone else. The internet is full of pages raising awareness and sharing stories so I wanted to do something that would make us stand out, to make sure that we reached as many people as we could while also helping to introduce disabilities into modeling and fashion.
​Down the road I hope to initiate inclusion in our local community, to start a network of special needs families, and to make sure that no child with a disability has to worry about being left out or picked on. Inclusion and accessibility are so important to me and I hope we can take our situation and use it to help other people. ​ 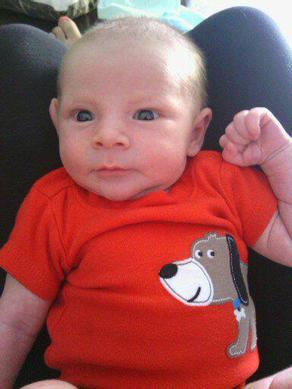 "It'll get better when he turns three."
"Just wait until he turns four."
"Five is where kids really level out."

I was beginning to think someone was playing a cosmic joke on me. Every year I was showered with advice and told the light at the end of the tunnel was near, his behavior problems would subside soon. And every year it got worse. I didn't immediately think something was wrong, I figured some kids are just a little more naughty than others and we would parent and discipline it out of him. I was wrong.

When Tanner was between the ages of one and three he was in daycare, the same daycare ran the whole time by the same amazing women - who I know loved his as if he was her own because it takes a special level of patience and love to have a child with behavioral problems that isn't yours 8 hours a day. I would pick him up and hear stories of hitting and pushing and yelling. I was so thankful to find someone who could handle his behavior and loved having him there.

At age three we decided to put him in pre-school. We wanted to have a balance of social skills and academics being introduced before kindergarten, and also to ease him into school life. He absolutely hated it. He cried every time I dropped him off and ran to the car when I picked him up. It took years of convincing to get him to tell me why he hated it so much, unbeknownst to me Tanner was suffering from social anxiety and the thought of socializing with the kids at school that he did not know was petrifying to him.

At this point at home things were getting worse - he was unapologeticly defiant, had no fear of authority and had no intention of doing anything that he didn't want to do. He constantly got his toys taken away, time outs, grounded, spanked, yelled at, reasoned with. Nothing worked. At one point I took everything that was in his room other than his bed and his clothes and locked it up for months, he did not care at all.

I googled and pinterest-ed until my fingers bled, every form of parenting out there had been pinned, read and tried to no avail. 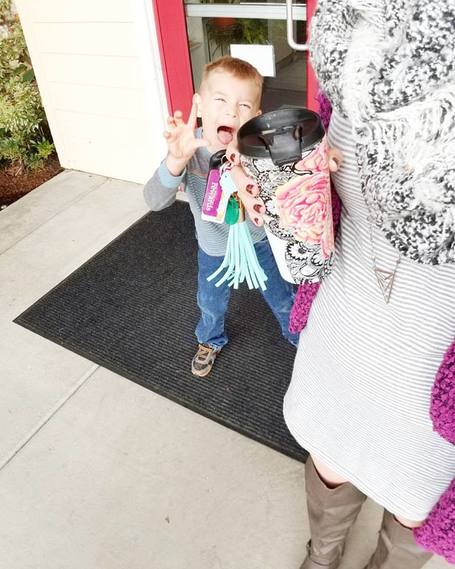 In 2015 Annie was born. We quickly learned of her diagnosis and in the mist of absorbing with all of her diagnosis' I thought about the statistics of special needs siblings and was determined to not let that be an issue for Tanner. If he had behavioral issues it would not be because he thought he was placed on the back burner and his sister got special treatment. I did everything in my power to keep things equal and make sure he knew that he was just as loved and his needs were just as important.

In 2016 we said goodbye to Idaho and made Oregon our new home.

Tanner was having the same behavior problems but to a higher degree, he was not only lashing out at me at home and having occasional outbursts at the grocery store he was consistently having issues everywhere we went with everyone we saw. I took Tanner to his pediatrician to discuss his behavior issues and what I could do to help him.

​You know how your kids are sooo sick and then as soon as you get to the doctor they are smiling and happy and you are convinced their doctor thinks your a hypochondriac? This was not one of those cases.

Every time I took him to see a doctor he showed her exactly what I was talking about. His doctor gave me a questionnaire to fill out and one to give to his teacher, I turned them both back in and Tanner was quickly diagnosed with ADHD and suspected Oppositional Defiance Disorder. We decided to put Tanner in therapy to help him learn how to control his temper and hyperactivity. While going through multiple failed therapists - ones that were easily manipulated to do what Tanner wanted or just sat there and did not give Tanner or I any tools to work with - I continued to talk to his doctor, Tanner's behavior was still all over the place and his therapists weren't helping yet so we decided to medicate his ADHD.

In the mist of all this we began to notice Tanner having little twitches and movements. I didn't think too much of it but when it didn't go away for a few months I took him to his doctor. It is possible for ADHD medication to bring about tics so we adjusted his medication a little and watched the movements. When they still did not go away his doctor suspected he had a childhood tic disorder and send us home with instructions to monitor it. Months went by and the tics got more frequent and more severe, it was starting to effect his day to day life and we decided to put him on medication. 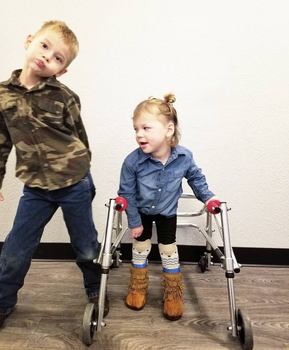 At this point Tanner had started kindergarten and I had been working with his teacher and wracking my brain thinking of ways to effectively reverse the behavior he had hardwired in his brain. We were so lucky to get such an amazing teacher for kindergarten - hand to God we would not have survived without her.

Tanner is by far my hard kid, I know how to help Annie but Tanner is a bit of a mystery most of the time. But in between the tantrums and the whining and the moments I curse everyone I have ever met for not telling me how hard motherhood is, he is amazing. He is sweet and loving and helpful, he loves his sister fiercely and always protects her. On my hard days I hold on to thoughts of sweet Tanner, and usually right when I get to the end of my rope sweet Tanner come out for a while.

By the end of kindergarten the tics had worsened and no matter how much we messed with his ADHD medication. I started my research back up and looked up every aspect of Tanner, every symptom I could have ever possibly witnessed and I found Tourette Syndrome. You guys, it fit like a glove.  I talked to his doctor and she agreed so we went to see a neurologist where he was officially diagnosed. Once we had a diagnosis and access to resources I felt a weight lift. ​

​Tanner started with a new therapist to help us through his struggles and diagnosed him officially with moderate/severe oppositonal defiance disorder. We took Tanner's new diagnosis' and catered our parenting strategy to the way his brain was wired and how his mind worked. We are still far from perfect parents and we read and research and try to figure out what will work for him.

We have a long road ahead of us of active parenting and advocating and finding five thousand ways to discipline effectively - and that is exactly what we will do for Tanner.